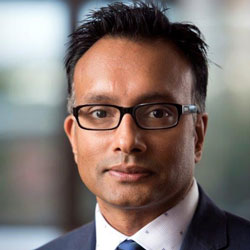 Shantha Rajaratnam was awarded his PhD degree from Monash University in 1998, and completed a Bachelor of Laws degree in 2000. He undertook postdoctoral training at the Centre for Chronobiology at the University of Surrey, UK from 2000-2002, where he investigated human sleep-wake regulation, in particular the role of melatonin. In 2004 he took up a visiting academic position at Harvard Medical School and Brigham and Women's Hospital, Boston, USA. He returned to Monash in 2006 and established the Monash Sleep Network (now serving as the Chair of its Executive Committee), which combines scientific and clinical expertise in sleep research within the University and the affiliated hospitals. He continues to hold an academic appointment at Harvard Medical School and the Brigham and Women's Hospital in Boston, and holds an adjunct research appointment at the Woolcock Institute of Medical Research in Sydney. He is a registered psychologist, Chartered Psychologist in the UK and Associate Fellow of the British Psychological Society.