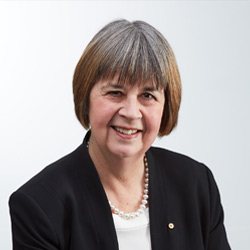 Professor Cornish obtained her PhD for research undertaken in the Biochemistry and Microbiology departments of the University of Melbourne. After working as a post-doctoral fellow in the Botany School of the University of Melbourne she joined the newly established plant biotechnology company Calgene Pacific (later named Florigene). She spent 11 years with the company in various leadership roles including Research Director and Managing Director.

In 2000 Edwina moved to the University of Adelaide as Deputy Vice Chancellor Research and in 2004 she was appointed to the same role at Monash University. In 2012 Edwina was appointed Monash’s inaugural Provost and Senior Vice-President a position she held until her retirement in 2016.

Edwina has extensive experience at the interface between government, research, industry and the higher education sector, and has held numerous board positions. She is currently a member of the Board of CSIRO and the Council of La Trobe University.